The Scripps National Spelling Bee preliminaries test winnows the field of the nation’s best spellers at their national competition. By using Scantron scanners, forms, and software, they transformed a lengthy process into an exciting qualifying round for spellers, their families, and the media.

“We went from about 4 hours down to 40 minutes…that turned it into more of an event.” 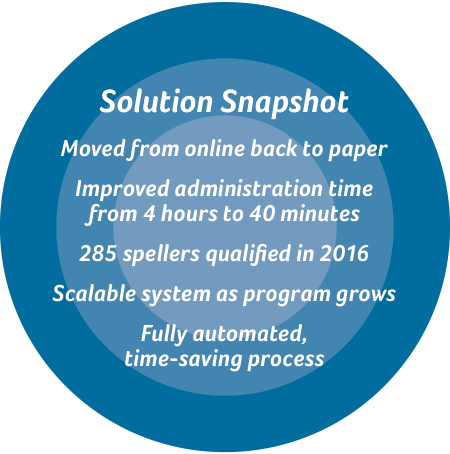 Each year, thousands of spellers compete in final local bees around the country to determine the nation’s best spellers. The winners of the local bees are qualified to travel to Washington D.C. and compete at the national level. The preliminaries test winnows the field down to no more than 50 spellers who will compete in the competition finals.

Before using a Scantron solution, the event organizers used a computer-based system onsite that served them well for several years, but was not easily scalable given the anticipated growth of their program.

“We chose the computer-based solution to test the spellers in smaller groups because we couldn’t get all of the spellers in the room at once because of space limitations at the event hotel at the time,” says Laurie Morris, Editorial Specialist for the Scripps National Spelling Bee.

“Scantron’s solution is easily scalable. The number of spellers changes every year. As we add more spellers, we know we’ll be able to use Scantron and maintain our speed.”

“Being able to administer the test to all the spellers at once really freed us up,” states Morris. “We went from about 4 hours down to 40 minutes.”

There were other benefits. Because all the spellers can test at the same time, they can hear the Bee’s pronouncer—the person who reads the words to be spelled—live instead of via recordings. 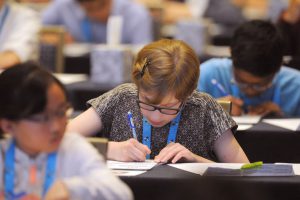 “Their families and the media could also be in the room, and that turned it into more of an event,” Morris says. “That was really great.”
The Bee is pleased with the new experience. “The custom forms team was very responsive,” notes Morris.

The Scripps National Spelling Bee’s Scantron solution allowed them to easily communicate results to spellers. “The grading tools let us deliver really quick feedback,” says Morris. “We like that the software stores an image of the speller’s form so we can attach that image to emails but still keep the original.”

Watch the iNSIGHT 4ES with SelfScore option in action!

In an increasingly data-driven world, how do you capture the information you need without…